Cruxnews
Raipur:In a joint statement released from Lucknow,Uttar Pradesh by Bahujan Samaj Party supremo Mayawati and Janta Congress Chhattisgarh(J) mentor and former Chief Minister of Chhattisgarh,Ajit Jogi,the formation of this grand alliance has been formulated and confirmed. The coalition between BSP and JCC (J) has raised many eyebrows and unsettled political equations. With assumptions of a BSP and Congress tie up it may be considered as a hit below the belt for the main opposition party.
According to this joint declaration it clearly defines that for the greater interest and to champion the cause of the poor,dalits,natives,OBCs,minorities, peasants, youth,women and small scale businessmen this historic political decision will be a major positive turnaround for the state and its 2.5 crore people.
This declaration alleges that growth in Chhattisgarh has only been for a handful of people in the past 15 years of BJP rule leading to a more capitalistic society making the rich get richer and the poor get poorer. Is it an aphorism for the state, is the question that needs to be answered. It also accused the present government for its dependency on the Central Government, the Congress leaders’ lack of political will and infighting has also  been mentioned to draw an inference for compromising Chhattisgarh and it’s people at every juncture.
Ideology of both parties being same,mass base of the combined force will be even broader with a zealous leadership under its Chief Ministerial candidate Ajit Jogi.Like minded political parties have also been welcomed to help Chhattisgarhis raise their voice and have a say in any important decision taken by the Central Government.
Seat sharing has been prefixed with BSP contesting 35 and JCC (J) in 55 seats.With an aim to defeat the ruling BJP the elections will be contested with a broader perspective in view and organisational strength being the ace factor.Concluding the declaration it states that the final blue print is in waiting and will be prepared at the earliest. 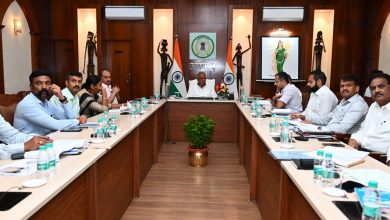