Chhattisgarh Times,Raipur.
In his briefing with the media, Union Minister for Human Resource development Prakash Javadekar was seen in an upbeat mood in Bhartiya Janta Party’s state headquarters “Ekatm Parisar.” He expressed his deepest sympathy for the martyared jawans who were brutally killed by naxalites in Bijapur yesterday. In his briefing he said that during the present tenure of BJP under the leadership of Raman Singh, naxalites have been forced to withdraw to a confined space which is merely a third of the area which they once dominated. Around 350 have been gunned down by forces and continuous pressure alongwith comb and search operation have made around 5000 left wing extremist surrender. He claimed that once SURGUJA which reeled under the red menace is now completely free from it’s terror. His sharp attack on Congress could not be missed as he said that during their rule in the state from 2000-2003,naxalism reached it’s peak with senior Congress leaders knowing the whereabouts of top Maoists. According to him things have changed for the better with central and state efforts wherein yesteryear voters who were primarily Congress votebank shifting to BJP. In his strongest rebuke he said that once a ruling party in 16 states the Congress’ rule is down to only 4 states at present whereas the Bhartiya Janta Party continues to rule in 19 states. Aspirations of the poor has been primary as funds for Atal Awas Yojna has been credited to the beneficiary account directly when compared to the Congress regime where one had to spend enough money to middlemen who literally siphoned off a chunk of the amount for Indira Awas. Talking about “Rozgar Guarantee “He drew parallel with the Congress government which spent 27000 crore which is half of which the present central government has already spent.
When asked about Ram Mandir at Ayodha, he said that it’s not part of the party’s agenda for Lok Sabha Elections 2019 but the nation wide sentiment for construction of the Temple should be held in respect which favours for construction of the same. 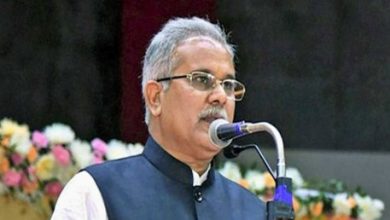