The much talked about Kharsia constituency of Raigarh has witnessed much political rivalry since it’s inception. With total electorate of 1,98,686 among which nearly 70% are farmers and with a total literacy of 85% is all set to experience a tough battle between arch rivals Bhartiya Janta Party and Congress.
A Congress garrison from the very start, Kharsia withstood the Janta Wave of 1977 and even in tough times for the party, congress won it by more than 20000 votes. 1980 and 1985 were no different where the party retained the seat with almost the same margin.The by election of 1988 was between the once uncrowned king of Madhya Pradesh, late Arjun Singh of the Congress and the dynamic late Dilip Singh Judeo of BJP. Judeo’s charismatic figure aided with his social work among tribal could not help him win,though he narrowed the winning margin of Singh to a meagre 7000 votes.
With the late Lakhiram Agrawal,one of the key person instrumental in carving of Chhattisgarh gaining popularity and rising steadily through the political ladder even could not win this seat after facing a mammoth defeat at the hands of the slain Congress leader, late Nand Kumar Patel. Patel bagged 50.52% votes as compared to Agrawal’s 35.26%.
Patel was elected to this very seat 5 times in a row till 2013 but a dastardly and cowardice attack by naxalites led to his untimely death in the infamous Darbha valley massacre of 2013,his elder son was also killed in this incident.
A young grieving Umesh Patel,younger son of Nand Kumar Patel fought the election on a Congress ticket.He won the hearts of the people who flowed with the sympathy wave and won a landslide victory of over 35000 votes.
Come 2018 elections,we see an IAS officer resigning from his post to join the ruling party,citing reasons of breaking the shackles of bureaucracy and a zeal to serve the masses. Om Prakash Chaudhari from Bayang in Raigarh district is a well known name in the state today, a collector who is credited with establishing an education city for tribals in naxal hotbed of South Bastar. Chaudhari hails from the backward Agharia community which has a sizeable population in Raigarh. With Janta Congress Chhattisgarh and Bahujan Samaj Party alliance withdrawing it’s Candidate from Kharsia a “dual duel” between the erstwhile collector and the Patel Scion can be seen.
Anti incumbency is not much of a factor here as people all over seem to be greeting their MLA in a sort of festivity and upbeat mood,among drumbeats and huge fan following a beaming Umesh is confident of another mammoth victory.
Chaudhari on the other hand is continuously canvassing by direct people interaction,bike rallies and gatherings.His gathering usually starts with the student wing of the BJP setting the tempo right followed by his humble speeches wherein he tells his tales of hardships he faced in his path to cracking the civil services exam. He doesn’t in any way verbally attack Umesh but lambasts the Congress party for it’s nepotism and autocratic way of working,he promises to take Kharsia to newer and greater heights of development. His relentless efforts in reaching the masses is gaining him more popularity with every passing day but will it be enough to beat the young gun from Nandeli,whose father had paid the ultimate price of laying down his life while facing naxal bullets. Congress is confident and so is Umesh of another historic win,as the” D Day” nears we wait to see if the progressive youngster from Bayang can make it big in the political circle too. 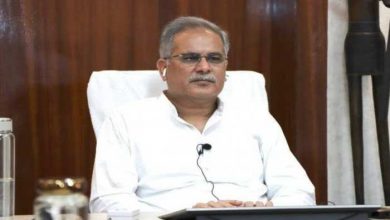