Chhattisgarh Times Raipur: Just a few days before counting of votes for the state assembly elections, Congress state in-charge PL Punia mounted an attack on BJP on Twitter.
Punia wrote in his tweet that “BJP doesn’t believe in democratic process. They want power by hook or by crook. But now they are not going to win even with these nefarious designs.”
Claiming the victory of Congress in all the five states, Punia mentioned in his tweet that “People have already decided to pack them off and Congress Party is coming to power in all the states.”
A day before yesterday Punia held a review meeting with all the 90 party candidates. He took review about the present situations in all the constituencies and instructed the candidates to be cautious during counting of votes as anything could be done to manipulate the figures.
Praising the efforts of the Election Commission and state chief electoral officer, Punia said that the voting in the state assembly elections was conducted in a very smooth and effective way; likewise we expect that the counting of votes would be done in the same way.
Punia said that we have full in Election Commission and we are assured that the commission complete the process of counting of votes in a fair and unbiased way without any impartiality. 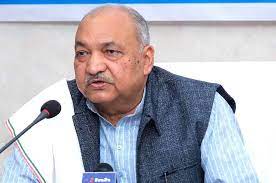