Raipur: Chief Minister said that state government has decided to withdraw more than 20,000 cases of keeping liquor and stealing wood from the forest, registered by forest department on forest dwellers of Bastar and Sarguja district.

Addressing a public gathering at Barsur in Dantewada district as a part of Atal Vikas Yatra, Chief Minister Raman Singh said that more than 20,000 cases on forest dwellers will be withdrawn soon by the state government. Besides, the government has decided to increase the payment of the managers of Primary Forest Committees from Rs 12000 to Rs 15000.

He also informed that Rs 750 crore is being distributed as bonus to the tendupata collectors in the forest areas. Also, slippers of Rs 12 lakh are being provided to them to ease their work.

Singh said Chhattisgarh will be one of the most developed states of the country till the Silver Jubilee Year of its establishment. Our target is to make “Nava Chhattisgarh” by the year 2025.

“By the end of the Silver Jubilee year, every village of the state will have road, electricity and internet connectivity. All the villages will have basic health and education facilities, and the villagers will be provided with all the basic amenities by 2025”, he said.

CM said Barsur is a well-known site of archaeological and historical significance in Dantewada district and it has been an important centre of socio-cultural activity since ancient times. Dantewada region has faced many problems like poverty, backwardness, exodus before the establishment of the state. Singh said that earlier the forest dwellers used have mere kandmul fruit as their food, but now with the introduction of Mukhyamantri Khadyan Yojana they have been freed from the sufferings of hunger. Today, the entire scenario of Bastar, including Barasur, has been changed.

He added saying that a major change has been seen in the entire state including Dantewada after the introduction of Mukhyamantri Khadyan Yojana, which has helped to eradicate hunger in the state.

Singh said “seeing the enthusiasm of the common people here, it seems that the people are happy with the works being done by the and through Atal Vikas Yatra, I have come here to assure the people that the development works in the state will increase four times in the next five years”.

He said that Dantewada has been developed a lot in the field of education, children from the district are studying in top medical, engineering colleges and in IITs and IIMs. In the coming days, every village of Bastar will be illuminated and will have pure drinking water supply in the entire area and in the next five years, the development of the state will be marked in golden letters in the pages of history. 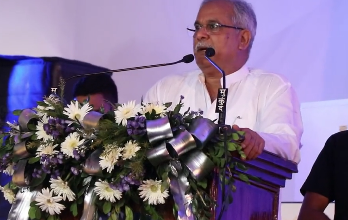